Our partnership with the Aurora Orchestra kicked off in spectacular style this term. Students were first invited to see a dress rehearsal of the Aurora Orchestra’s concert ‘Objects at an Exhibition’ at the Science Museum in Kensington. We were first struck by the location – we weren’t going to see a concert by an orchestra in a concert hall? – and then, when we got there, by the fact that we didn’t have chairs to sit on! Instead, we were led around the museum to see music performed in front of the very exhibitions that inspired the music we were listening to. Another thing we noticed was that the instrumentalists didn’t always sit next to each other. Sometimes, they were spread out over a large area and couldn’t even see each other as they were hidden behind cabinets! It meant we listened to the music in different ways, with our attention moving between places and players.

After the visit to the museum, a group of 30 Lister students from Years 8 and 9 worked with Jessie Maryon Davies and players from the Aurora Orchestra to compose their own music based on objects around our school. As students worked together to come up with the things that defined Lister, a few ideas emerged from nearly every group; firstly, that the school bell permeates everything we do, cutting it when we’re having fun playing music, and that the photocopiers are always breaking down! From that, the first musical ideas were born as the students experimented with their instruments to reproduce those familiar sounds in unfamiliar ways.

Over the next three sessions, small groups of students worked with players from the orchestra to develop thematic ideas and turn them into full pieces. Other ideas emerged; how boring detention is and how that boredom could be portrayed on instruments; how busy the stairs are during lesson changeovers and how ascending and descending musical phrases clashing in the middle could represent that; and finally, how scary it is when the headmaster shouts and how that could be represented in music with busy, quiet quavers that suddenly burst into a loud chord. In addition, the students also worked together to plan how to stage the concert, taking inspiration from what they had seen and experienced at the Science Museum.

The project culminated with a concert here at Lister – staged in the Agora, with players spread out over the space or stood in front of the object that inspired them. The audience were free to move around the rest of the space to get a better look at where sounds were coming from…..

Watch the all videos from the concert on our playlist: Aurora Project concert videos

With thanks to Jessie Maryon Davies, and Julia Roderick and players from the Aurora Orchestra 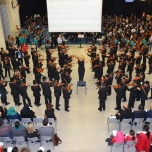 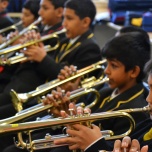 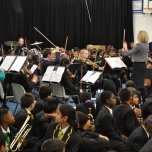 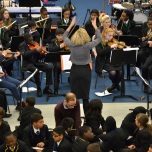 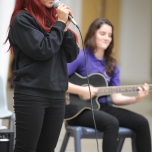 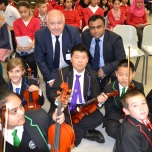 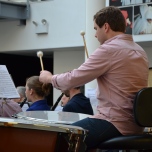 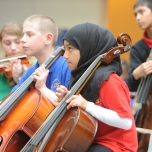